Round 1 of the B14 Gul TT series took place at Rutland Water over the 2nd and 3rd of April. With this being a “Garda year” interest in the class is high, leading to keenness amongst existing members and also the welcome return of some old faces (some older than others).   The potentially most dangerous returnee, Nick Craig, was away topping up his tan in Barbados sailing a type of 14ft dinghy with a rather more general purpose.   With decidedly more clement weather than last year’s event 10 boats turned up all of which could be top 10 championship contenders, so nobody was guaranteed immunity from a back-of-the-fleet result in any race.

After a brief rain shower, which gave us the excuse for a Rutland breakfast and a cuppa, boats were rigged and launched into what the forecast promised would be a 13 knot SSW and sunshine. As the sun arrived the wind started to play tricks – at times a relatively (this is inland after all) steady breeze would be spread across the lake interspersed by random areas of near-calm, making the downwind legs as predictable as a myopic hare navigating a minefield. Appropriately perhaps, given the reasonable proximity of Nottingham, this was to be a “Robin Hood” day – the wind would cast spells to ensure that the rich got poorer and the poor got richer. It was a day when being in front at the windward mark guaranteed only high blood pressure and threatened stress-induced heart failure.

After a delay waiting for the wind to settle and the course to be tweaked proceedings commenced. Race 1 was won by Team Gul/North Sails (Barnsie & Chinscar) followed by Blue Badge (Beezer & Ferret) and Anthill Mob (Tim Harrison/Jonny Ratcliffe), but plenty of others had their turn near the front as the roulette wheel span.   Race 2 was won by returnees and 2013 World Champions Anthill Mob – clearly not having stepped in the boat since September 2014 hadn’t done them much harm. They were followed home at a distance by Team Harken (Simon & Nikki Hadley), who held off Blue Badge for the duration of the race. Race 3 brought another spin of the wheel of fortune with Blue Badge running out winners ahead of Troublegum (Alan Davis/Rich Bell) who had made the early running, and Team Gul/North Sails. 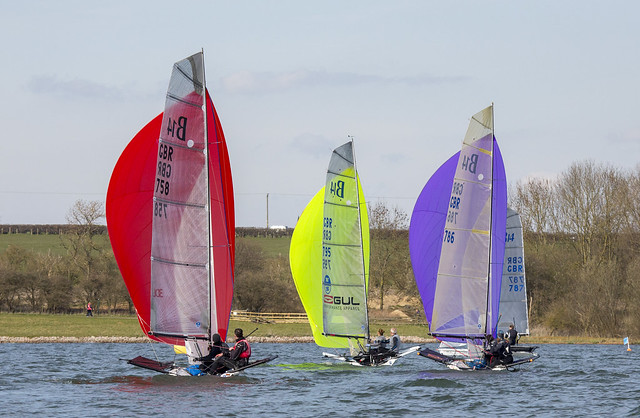 The day’s proceedings were enlivened by some teams indulging in spontaneous limnological research, including Mrs C. (Piers Lambert/Alex Capon) and Flying Donkey who both succumbed to instant 45-degree windshifts (not good when your crew is on the foredeck).   With Rutland being a popular venue for the hunting set, Wattsy was heard to dedicate his swim to the cause of the endangered Rutland fox – a loud cry of “For fox’s sake” ringing out across the water as they were dumped into the lake.

Saturday night saw a split in fleet activities, with the Brightlingsea reps heading north to Newark for a guru-like consultation with Gavin The Wise Man. This clearly worked well for Blue Badge as the next day’s events would prove, whilst the pack headed to the Old Pheasant at Glaston to formulate their game plan for the next day on the hunt.

Sunday dawned slightly chillier but again with a healthy 10-12knot breeze blowing. This was to be a different day to Saturday – more of a George Osborne day where the spells cast ensured that the rich got richer at every opportunity. Some tardiness amongst the other fleets combined with the complexity of laying 2 windward marks, 2 spacers, 4 gate marks, 2 finish marks and 2 committee boats in the shifting wind (who’d be a Race Officer) led to a protracted bout of Competitive Hanging Around, especially for the good boys & girls who had arrived at the course on time. 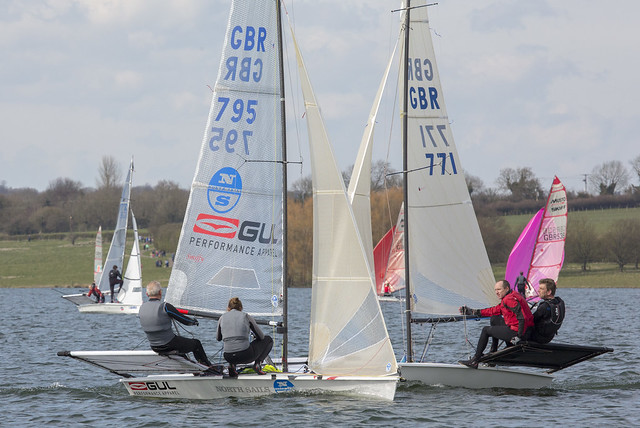 When racing got underway Blue Badge donned their Wizard hats and worked through to be in front at the finish, followed by Flying Donkey and Anthill Mob. There were battles royal right through the fleet with places being decided on the finish line. A curious feature of the day was the presence of much shoutiness, some even interlocked wings loudly like rutting stags, strange behaviour for what is normally a laid-back fleet but perhaps a symptom of the Garda-induced excitement starting to build already. A long delay whilst the course was reset following a substantial windshift gave the opportunity for more Competitive Hanging Around – practice makes perfect and great skills were on show.

Eventually race 2 saw Blue Badge extend their greedy tendencies further, followed by Anthill Mob and Team Gul/North Sails. This gave Blue Badge the event, but the thing about being greedy is that you can never have enough.   Thus in race three, after a delay caused by the wind shifting back to where it had been prior to race 2, they picked up the ball on the first beat, chased initially by Team Gul/North Sails, and displaying Oligarch levels of greediness ran off with it to win by a somewhat flattering and frankly embarrassing distance (rumours that they have filed the day’s results with Mossack Fonseca in Panama are hotly denied). Flying Donkey broke clear for 2nd, but behind them there was a titanic scrap for 3rd which was resolved in favour of Anthill Mob.

The day’s entertainment was wrapped up by an anonymous team making an ambitious attempt to combine limnology with the traditional “guess the number of car keys at the bottom of the lake” game. Clearly nobody could prove how many car keys are at the bottom of the lake, but assuming it was N on Saturday then we can prove beyond reasonable doubt that it was N+1 on Sunday.

So, among other clichés, at the end of the day - I go to bed. Blue Badge ran out winners, helped in no small measure by those pointy hats. Of course the thing about wizardry is that some days you’re the hat and some days you’re the sleeve, but on this occasion it was hats firmly in place. 2nd & 3rd and 4th & 5th places were all decided on the last race.

Gul provided very welcome & gratefully received vouchers for the prize winners, including a number of merit awards, for which the fleet is extremely thankful. At this rate we will all be dressed in shiny new Gul gear by the end of the season.

The fleet would like to thank Rutland Sailing Club for putting on a complete series of 6 races on well-laid courses in trying conditions, and the sponsors Gul for providing a great spread of prizes.

The next event in the series is at Stokes Bay Sailing Club on April 16/17 where the presence of Solent tides, waves, the return of 2015 National Champions Nick Craig and Tom Pygall in their new boat plus many more competitors coming out of hibernation will ratchet the level of competition up nicely and most likely see a very different set of results.