The B14 winter travellers headed up the M40 and west along the A14 to Draycote Water Sailing Club .for the Draycote Dash to be greeted by sunshine and 5 knots of wind with 10°C plus 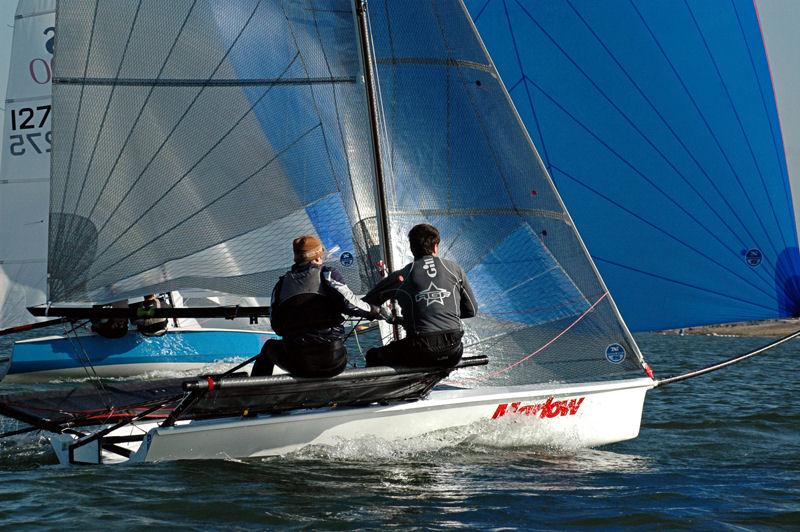 Having had high winds at the Starcross Steamer and Freezing conditions at the Tiger Trophy, the conditions were a welcome relief to the fleet. The low water in the reservoir, meant boats needed to be aware of the shallows, but with guard boats and layout of course, it did not create a problem.

The low water probably put off a number of people across the fleets but the 80 entries of which 79 attended, had a good weekend's racing. Due to the size and shape of the course, it was going to be one for the slower symmetric boats and single handers. The B14s and like were to have their hands full on the close reaches but supplied a spectacle. All starts were to be under the black flag.

Marlow have sponsored leg 3 of the Seavolution Series and have now also sponsored GBR 769 Daniel Cowin/Dan Hollands, who were to show some great speed over the weekend and at times lead the B14 charge through the fleet.

Saturday saw 5 races sailed in 5 – 8 knots building to 12 knots at times. On the Trapeziod course it was going to be an interesting day on the water. The B14s nemesis was going to be traffic and the tight first reach where they would struggle to hold the kite, especially if near the symmetric boats.

The boat that was to show there metal here was Pink Pussycat (Simon Hadley/Nikki Hadley) at 22 stone. They showed the heavier teams what can be achieved with shear determination and skill 3 sail reaching.

Race 2 and Marlow took up the charge followed by Pink Pussy Cat. As the breeze built to 8 knots, Seavolution broke through to take the win in the B14s.

Race 3 and Pink Pussycat did a blinder off the line followed by Marlow and HB & R Consulting with Seavolution gybing off the pin and ducking the fleet. Over the race Pink Pussycat extended with Seavoluton picking off boats to pip Marlow for second B14 at the finish.

Race 4, the breeze was now up to 10 knots and the B14s were starting to come into their own. Again Seavolution gybed off the pin, ducking the fleet and broke right as the fleet went left. This was to be their get out of jail card as this paid, and they arrived at the windward mark as first B14. Over the race they pulled away in clear wind. Pink Pussycat got flattened in second on the tight reach with kite up, so releasing Marlow to give chase. Seavolution bagged another from Marlow.

Race 5 and the stongest breeze of the day, Seavolution started at the pin with 2 Fireballs and led up the beat to the windward mark and extended throughout the race to win. The other B14s battled through the traffic with Marlow, leading the pack first followed by HB & R Consulting. Pink Pussycat retired to the bar. Marlow followed home with HB & R Consulting in 3rd.

The fleet with some other sailors retired to the Dun Cow in Dunchurch for the evening to enjoy some good food and beer.

Sunday and no wind. After a delayed start Race 6 started. This was to be a race of 2 halves with the fast handicap fleet sailing into no wind and with the slow and single handicap fleets catching up at the leeward mark. At one point, there were 40 odd boats with 10 boat lengths of the mark. The raced was shortened at the gate with Seavolution 3rd over the water and Pink Pussycat in hot pursuit, but HB & R Consulting had nearly gained the lead at the leeward mark.

After lunch a 100 minute pursuit took place with double none discardable points.

Off the start the sole MPS led chased by Seavolution and Pink Pussy Cat. At the windward mark they had passed the MPS and now were chasing down the fleet but the MPS stayed in the mix throughout the race. Over the two laps the group extended and compressed with both Marlow and HB & R Consulting holding second. As the race closed out, Seavolution led followed by Pink Pussycat, Marlow and HB & R Consulting. Having got into the Fireballs and RS400s, it was to prove too much on the day, and so the fleet headed for shore and the trek home.

Thanks must go to the club for a well run event where you would not have noticed that they had water depth issues.

The fourth and final in the Seavolution Series will be the Hoo Freezer. This event sees the B14s being sponsored by Allen Brothers. Let's just hope that we have a good turn out and a legendary Freezer where we can stretch the B14s legs.