The top 3 spots are now held by the teams from down under, with the Cadre brothers from france in 4th and recently crowned European Champions Tim and Johnny lying in 5th. With more racing today we can only we can only wait in anticipation for the next update to the results sheet.

Day 1 results are in and can be found in the table below. 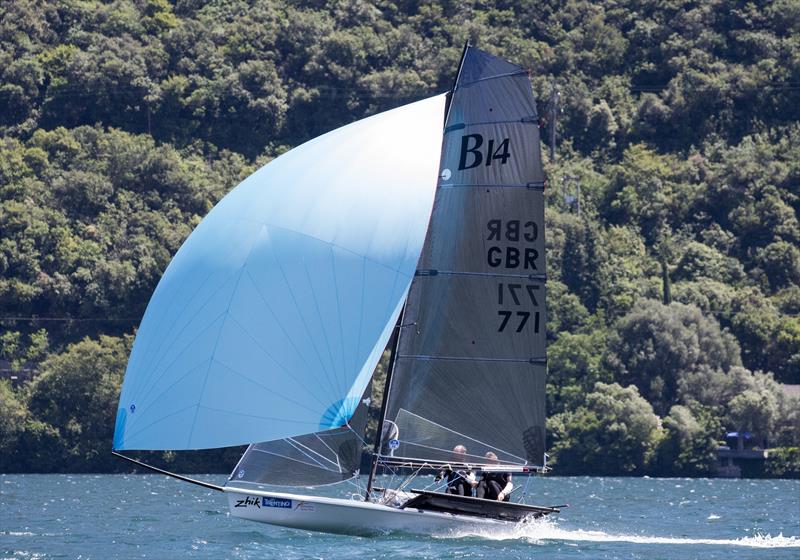 Finally Garda delivered the goods with the Ora solidly in at 15-20 knots. Up the first beat AUS 793 (Bangers/Gracie), GBR 787 (Alan/Ritchie) and GBR 795 (Barnsie/Char) led out to the right under the cliffs into more pressure and a big header. GBR 791 (Wattsy/Bish) after an average start followed in with good pace. The first beat was really decided in calling the layline back with GBR 787 making the best of it to lead round from GBR 791.

Finally it was a beautiful sunny, not a cloud in the sky and the Peler wind died out early at about 10am. Things were looking good for a strong breeze to come in from the south.

Started in about 12 to 15 knots and the breeze got stronger throughout. The boats that did well went left into lucky point led by AUS 375 (Craig/Paul), who rounded the top mark about 60 meters ahead. From this point the Melbourne boys were uncatchable but there was some movement around the rest of the top 8. Off the front the places were changing regularly with Team GBR and AUS having a right ding dong. AUS 375 had a shocking kite drop and headed out to the right hand side of the course, managing to slip back about 5 or 6 places taking several Poms with them. Aus 371 (Rick/Mickey) decided to go back to their old friend Lucky Point and managed to claw their way back to 2nd at the top mark of the second lap. AUS 375 were too fast to catch downwind but AUS 371 were able to jump into a couple of good gusts and clear away from the rest of the boats.