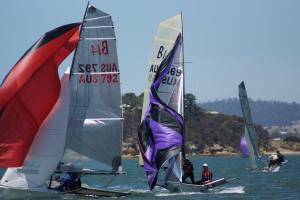 The day four forecast was for light to moderate southerly winds at around 10 to 15 knots. The day was brilliant sub with partial cloud. As crews prepared their boats on the startline for race 7, the wind was building significantly and reached a stable 15 knots

Day three was looking to be one for the heavy crews, a southerly at 15 to 20 knots was forecast and was building throughout the afternoon. Warm conditions and a cool southerly made for a top days racing on flat water allowing for fast and close racing.

Day 2 of the Australian B14 National championships got underway in a shifty, North Easterly breeze of about 8 to 10 knots. Whilst the breeze settled in from Northerly to North Easterly the fleet settled in by checking the course out in the new wind direction.

After yesterdays warmup, the Australian B14 National championships got underway in a shifty, east south easterly breeze of about 8 to 10 knots. The fleet of 24, 10 from interstate hit the start line early and on the first start a general recall resulted after too many boats were unidentifiable after the start.